The only thing that’s more of a reality check than hearing yourself on the radio, is hearing AND seeing yourself on YouTube. I’ve had my share of both lately. I made a quick note of things I need to pick up before my next public speaking gig…

2. consonants  For the love of od, et some Gs. Every sentence that’s supposed to end in “ing” only ends in “in” when I’m speakin’.

“We were comin’, goin’, drivin’ and talkin’… I’m an Oklahoma version of Sarah Palin.”

The “Listen To Your Mother 2016” videos are available. Click on the link if you feel like listenin’:

I’m one of those people who favors that expression, “long-story, short.” I don’t know why I say it so much. Probably just to throw people off.  But, honestly, if I prefaced a story with, “short-story long” or “long-story, even-longer” you know you’d come up with some clever excuse to get away from me…

Sunday was my first time to speak publicly, with a real live microphone.  Okay, I guess that’s not true either. I wrested the mic from my husband during the traditional Father-of-The-Bride speech at our daughter’s wedding in October. But, I’m not sure that really counts as, “public speaking,” because we were serving Beef Tenderloin, Smoked Salmon and plying our guests with free booze, so the least everyone could do was nod appreciatively and feign interest in my remarks.  Thus, I’m counting Sunday as my first official “gig” because the audience wasn’t bribed and most actually paid for their tickets.

I loved my 6 minutes and 45 seconds on stage!  So exhilarating!

Don’t get me wrong. Everyone who knows me, knows I typically talk for way longer than that. I can barely ask for directions to the potty from a total stranger in less than 10 minutes. In fact, I think several of my friends only attended the event to see if I could rein it in at the podium and confine a rant to less than 7 minutes.  My family has never experienced that level of brevity from me before, so they thought it was the best $20 they ever spent.  (More lies…I actually bought their tickets.)

When I first heard about, “Listen To Your Mother” an international movement, founded by blogger Ann Imig, designed to “Give Motherhood a Voice,”  while raising money for charitable organizations, I knew I had found my ultimate calling. I was born for this.  A little about LTYM here:

The first step was to submit an essay. Easy-peasy. I blew the dust off a “Doris Blog.”  And why not?  People are wild for stories about my mother, Doris. Her sassy, southern, filter-free mothering style has them weeping with laughter over their smart phones, lap tops and computer screens.  The woman has always had a way with me; the essays practically write themselves. It almost felt like cheating.

After my submission was accepted, I was invited to come down and audition. AUDITION! Not wanting to jinx myself, I didn’t tell anyone except my husband, until the night before, when I casually let it slip to my friend, over the telephone…

“Well, I better hang up now, it’s getting late, I have an early audition in the morning..”

She responded, “Okay, talk to you later!” (Completely unimpressed, as if she hobnobs with Hollywood-types on a daily basis…)

On the way to the audition early the next morning, I had a panic attack and told My Driver, “Pull over, let me out, I can’t do this!”

Fortunately, My Driver was my husband, Jimmy, who said, “Why the Hell can’t you do this?  Talking is your thing.  It might be even be your best thing!”

I explained to him that talking off-the-cuff at cocktail parties and interrupting other women at Book Group is not the same as “Public Speaking,” where you are actually SUPPOSED TO BE TALKING and people might be looking at me with expectations. I hate expectations.  I will cave under the pressure.

But then I didn’t…

I guess those Catholic School nuns were right about me all along.  I’m just a Talker.  I stumbled across this realization the other day:  In 29 years of parenting, I’ve never “grounded” a child. I just lecture them into submission. I’ve had children literally shove their car keys in my hands and plead with me to confiscate their cell phones, merely to extricate themselves from one of my lengthy sermons, but I never let up. I just continue to verbally illustrate my point about the error of their ways, until they vow never to stray again.

So, suffice it to say, I survived the audition process, was cast in the show, rehearsed with my fellow cast mates for a few months, and then actually managed to deliver a monologue about my mother in just under 7 minutes this past Sunday.

What an incredible experience. And, hopefully we even raised a little money for our charity – Positive Tomorrows, an inner-city school for homeless children. An amazing organization.  You can read more about them here :

One of my oft-touted sentiments about motherhood is that EVERYONE can talk about this topic.  Mainly, because everyone either is one, has one or knows one. 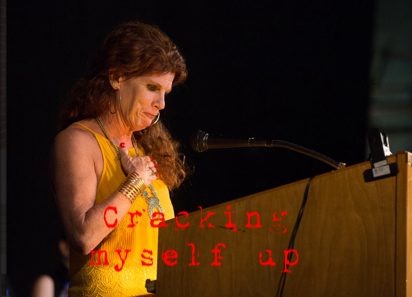