You Never Even Called Me By My Name…” (When We Nickname you, It’s a Sign of Love…)

There seem to be two kinds of families in the world. The kind that call their members by their given Christian names, and another kind of family that names you something adequate for the purpose of the Birth Certificate and then proceeds to call you by a myriad of random names that may or may not have any relevance to who and/or what you are.

Our family falls into the latter category.  In fact, we have nicknames for our nicknames.

The name Emilie morphed over time to “Millie,” then “Lillie” and eventually, “Lillie Pad.” There was the occasional leap from the “Lillie Pad” to “Zillie” (for “Bridezilla”) the year she was wed.  She didn’t really deserve it, but we couldn’t resist.

Mollie became “Yaya” when the boys starting jabbering around the turn-of-the-century. Apparently, it’s Greek for Grandmother – Mollie is neither Greek nor a Grandmother, but somehow her little brothers saw her that way and it stuck.

Gracie became “Pooshka Lou” as a baby, which was shortened to just “Lou” as a little girl and then lengthened to “Lou-cifer” during a few rough patches in her teens.

James is “June Bug” and Tommy is also “June Bug.” Eventually, in the interest of clarification, Jimmy started to call Tommy, “June Bug, Jr.”  At some point, he simply started calling both boys “June,” short for both “Junior” and “June Bug” and we remained as confused as ever.

Jimmy called me “Tiny Red” which I tolerated, but just as often called me “Patricia” which is not my middle name, a family name, the name of an ex-girlfriend, or even a name that I’m particularly fond of…

So, it was understandable when Emilie first started dating Matt, that she asked him what his family called him. He answered,

“They call me Matt!”

“Well, of course, but what’s your nickname?”

She persisted in her questioning.

Eventually he lit up and said, “On yeahhhhh.…Sometimes they call me Matthew!”

Shortly thereafter, per family custom, we took it upon ourselves to combine the only two things we knew about the guy (that he grew up on a farm and was also a doctor) into the most obvious moniker, “Dr. Farmer.”

Mortified, Emilie beseeched us repeatedly to only refer to him as “Matt.” She even went so far as to threaten that if anyone in our family (siblings OR parents) ever refers to him as, “Dr. Farmer” in his presence or within earshot, we would never lay eyes on the two of them again.

Less than two years later, Emilie and Dr. Farmer were engaged and we got down to the business of planning their wedding.  When Gracie asked if she could make a toast at the wedding, I thought it was a great idea.  My initial feeling was that the Father-of-The-Bride, was a man of few words, so it couldn’t hurt to subsidize his remarks with a few loving thoughts from the Bride’s baby sister..

It didn’t occur to me to be overly concerned about the theme or content of her proposed speech. A day or two before the wedding, bogged down in last minute wedding details, I asked her if she had jotted down some notes for her toast, she responded,

“I’m having a busy week at school, I’m planning to wing it…”

Much to the amusement of our guests that evening, Gracie commandeered the mic and launched into an expose’ of our family’s penchant for nicknaming, not just one-another, but all of our daughters’ boyfriends. She then proceeded to provide a few examples, such as “Dot-Dot-Dot Boy” (a young man who followed all his texts with “…” )as though his every thought was utterly profound. And, “Coffee Shop Boy,” (who couldn’t seem to make it through a simple date with one of our daughters without a strong jolt of caffeine.)

As I sat listening to Gracie’s toast, I suddenly realized one major wedding detail I had overlooked. I had neglected to exercise editorial censorship over the “toasts.”  I suddenly knew exactly where this speech was headed. With what I hoped was an adoring maternal smile plastered on my face, I waited anxiously for Gracie to drop the proverbial hammer.

And then she did exactly just that.  Gracie-style!

She shared with 200 friends (our side) and another 200 Prospective friends (Groom’s side) that he may be “Matt“ to all of them, but, to us, “He will always be our Dr. Farmer!”

As Gracie wrapped up her speech, I noticed the wedding guests, (particularly our brand new in-laws) howling with laughter, and so I began to relax. After all, it really was quite an accomplishment that we managed to restrain ourselves for the full two years of their courtship.  We made it all the way to the other side of the alter without a slip-up.

Now post-wedding, there’s really nothing left for us to do,  but sit around and wait on all the Baby Doctors and Baby Farmers, pondering what we may be inspired to call them. 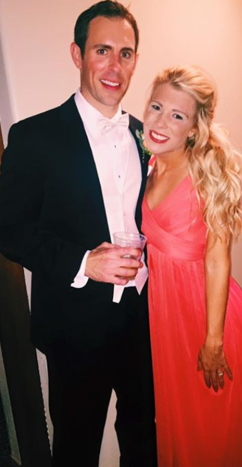 8 thoughts on “You Never Even Called Me By My Name…” (When We Nickname you, It’s a Sign of Love…)”