Tommy phoned me from the laundry room bright and early this morning.

I was 10 feet away in our bedroom.

“There’s something alive in here!”

“What do you mean by alive?” I shrieked, alarmed.  Admittedly, the population count fluctuates around here on the daily, but by my recollection, the only two beings that should’ve been alive in our house this particular morning were me and Tommy.

“I mean something with a heartbeat mom, you know ALIVE!”

I was baffled, as our dog was even out-of-town. It should’ve been all quiet on the western front.

I rang off and jumped out of bed, just in time to see our son grabbing his school stuff and making a bee line out of the utility room. In the time it took me to build a pretty impressive barricade out of rolled up towels and dumb belłs, he was heading out the door with car keys and backpack.

“You’re not going to just leave me here like this, are you?”

I was just kidding. We had spent hours the night before discussing all the tests he had coming up this week. The kid is a dedicated student, to say the least. But when he left I felt so all alone.

I remembered you had some mousetraps you’d purchased to set out at the lake house.  I grabbed those out of the garage, along with a jar of Skippy.

Then I did what any reasonable woman would do, I calłed one of besties.

“There’s a mouse in my laundry room!”

“Set the mousetraps and don’t lose a finger in the process!”

Seriously? This lackadaisical woman is the same friend I called the night you died? That night she said, “I’ll be right over!” And she was. It was like she had Scottie from Star Trek on standby to beam her places. So fast was she.

I received a similar response from the next friend I called.  My Native Oklahoma Posse was quite cavalier.

I’m an Army brat, I hail from military bases. I never encountered a mouse growing up. I suspect when they constructed those military installations, they sprayed the land down with Agent Orange, upon which they poured acres of concrete, surrounded by more miles of chain link fencing. To which they added a couple of MPs at every entrance and exit for added security.

All designed to keep the Russians and the Rodents out.

While my friends adopted a laissez-faire attitude toward my plight, I was becoming increasingly traumatized by the minute.

Ever since you passed away, I have actualły had people inquire whether I think I was overly-dependent upon you and, if I had a “do-over,” would I have tried to pay attention and learn more when I had the chance?

I do admit that every time you attempted to teach me basic survival skills such as how to set a mousetrap, how to operate our automatic sprinkler system or even a precursory understanding of CD ladders and annuities, I stubbornly crossed my arms over my chest, snapped my gum and rolled my eyes just like I did in high school Algebra class when I told Mr. Johnson,

I spent the next hour weeping softly as I struggled to grasp the mechanical workings of a mousetrap.

Then I googled “how to set a mousetrap” and found 3 videos on YouTube:

The first video I viewed featured a condescending gent who kept reiterating, “Do not attempt this unless you are a Certified Pest Control Specialist!” Dude, if I had my PCS certification (is that even a thing?) I wouldn’t be watching a YouTube video on something this elementary.

My second option was a tutorial by a sadistic-seeming chic with a British accent who sounded like she might be related to Siri. She creeped me out, “Be sure to hold the kill bar down firmly with both hands, while connecting the control hasp…”.

The third video was presented by a good old fashioned Redneck guy. “Put the peanut butter right here and then ya take this here thingamabob and ya stick it right in there!”

Now I had to get the mousetrap into the laundry room. I did so with much trepidation and a broom handle. I could still hear this creature rustling around loudly behind my washing machine. It sounded enormous. 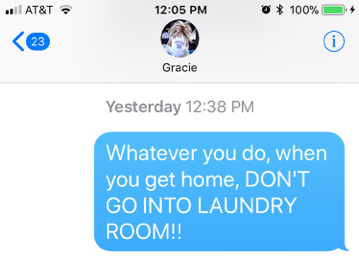 It was loud. As Gracie immediately pointed out a few hours later when she arrived home,“People use the expression ‘quiet as a mouse’ because mice must be generalły considered quiet…”  Based on that logic, she didn’t concur that our trespasser was a mouse.

“I can’t live this way!” was her next declaration, “You’ve got to call a Professional!”

She had a point, as it had been many fruitless hours since I’d set my trap. I had already called several pest control operators who wanted to sell me a full-on Rodent Elimination Plan and could schedule us for later this week. No can do.

The way I figured it, I had two options.
1. Burn the house down, which would surely kill whatever it was…
2. Prevail upon one of your many friends who told me, “Call me if you need ANYTHING!”

So I called your buddy, a former Marine. Then, just for good measure, shouted through the barricade,

To be honest, I don’t even know what Semper Fi means. It could be Latin for, “I’m overreacting.”

This poor guy came over dressed for work, in a business suit and ended up soaked in sweat after he dismantled my washing machine and then my dryer. Turns out a bird had flown into the dryer vent through my roof.

He was gently released back into nature at the pond across the street.  The bird, not the Marine.  (It’s actually not possible to gently release a Marine, who has just saved your life.) He got hugged all the way out to his truck.

I admit, I did feel somewhat vindicated. I truly don’t believe I would’ve handled that ordeal any differently even if I had listened to you a little and let you educate me more…