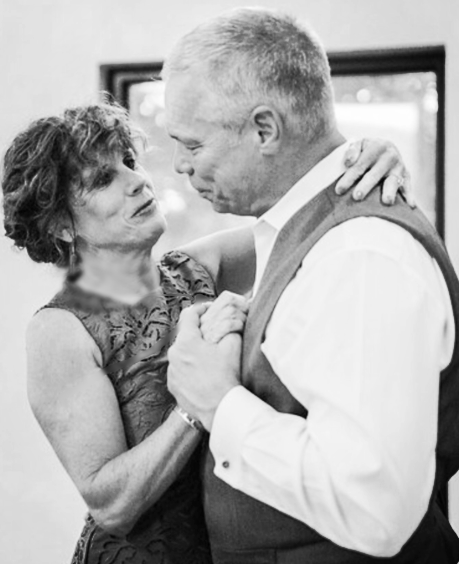 Who’s going to make sure I’m not a brat now that you’re gone?

A lot of what the Bible refers to as “The suffering of this present time…” actually translates to endless hours of me attempting to process things.

I spend a lot of time alone in my bedroom these days mulling over life – the abrupt left-turn mine has taken, in tandem with remembering endless events and other minutiae.

Right now I can hear you making a classic tongue-in-cheek comment about how grateful you are that I have “so much time for Navel Gazing!”  The implication: Some people have to work, you know.

“You know that work thing,  right?” you might add.  And I would respond cheekily, “No I’m not familiar with the concept of work…I’m a thinker!”

Some of my musings are actualły productive though.  I’m evolving through reflection.  And, at times, it seems a little “worky!”

One recollection that just came randomly flooding back to me today is a memory from Emilie’s wedding. There was this game we played on the dance floor. The DJ initiated it. It was designed to honor marriage, specifically long lasting marriages.

All the married couples are asked out to the dance floor, including the Bride and Groom. And then they are slowly eliminated by the length of time they’ve been married. Or not been married, as it were.

The DJ begins by saying, “Everyone that’s been married less than a day leave the dance floor!” That’s obviously the Bride and Groom, who are now free to go mingle with their single friends.

As the dancing continues, the DJ asks couples married less than one year, then 5 years to exit the dance floor. Then less than 10 years – adios kids!

The remaining couples continue dancing, as they are deeply admired and lauded by the other guests for all the time they’ve put into fidelity and devotion to one another. And the dance floor slowly clears of all the “newlyweds.”

20 years or less? Ha! Go back to your tables and order another glass of wine.  You’re gonna need it.  You newbies don’t know from sacrificial love and endurance spread out over multiple decades.

At 30+ years, you and I had been out there long enough for my feet to hurt in those ridiculous shoes.  But, instead of truly cherishing the moment and the accomplishment of over 3 decades in the trenches of true love, I was super annoyed.

It was my mother.  She was literally dancing all over my last nerve.

I was annoyed because Mom, who had been happily married to my dad for 40 years and widowed from him for 14,  was dancing with her “gentleman friend” and did not yield the dance floor as instructed when the DJ called out’ “40 years or less!”

Her date was a widower as well. It seems they had decided to take credit for all the years they had been married to their own spouses, but then were continuing to count alł the widowed years since their spouses had been deceased.

They just preferred their “take” on the game. In short, they liked their own geriatric math better.

So they kept on dancing.

I was standing there on the sidelines with you after we tapped out at 31 years fuming at my mother’s brazen attempt to steal the limelight.  In my book, Dad died at 40 years and she couldn’t just grab any other old man and dance off the next 14 years for “full marital credit” as if Daddy were still around.

Why I let this bug me so much is a mystery. Or not. Maybe it’s just the ultimate insight into all the obvious flaws in my character. When I complained to you, you said, “Hush, she’s having fun!” You were always the Bigger Man. (Of course you were always bigger and the man…)

I’m not sure why it even mattered so much to me; it’s not like we were giving away a Caribbean Cruise to the winning couple. One of Emilie’s bridesmaid’s grandparents won anyway – Mimi and Pop. I think they’d been married 70 years or something insane like that.

I’m glad they won. Pop died a few months later. It was heartbreaking. At least they were blessed with a long and happy life together…

I never in a million years dreamed we wouldn’t have a 50th Golden wedding anniversary. I thought we’d be that old couple out there at our grandchildren’s weddings, stealing the show and impressing the hell out everyone with our love and devotion to one another and the fine institution of marriage.

But here I am, all these months later with all this unfettered time to think. It’s hard to believe, but my Mom’s been gone 7 months and you’ve been gone 3 months. And I’m thinking about that stinkin’ dance.

I purposely picked one of our songs, “Lets Stay Together,” by Al Green. I thought the lyrics were so fitting for the tribute.

Suddenly, thanks to my newfound perspective, I now understand where Mom was coming from. She was, in fact, still married to Dad.

As I will always be married to you. It’s not like I’m on a game show and a buzzer went off when you died and I fell down a trap door. You lose! Or maybe I’m doing poorly in a board game, “Oops you lost your husband, move your piece back 10 spaces!”

I completely understand why my mom and her “Gentleman Friend” felt entitled to keep on dancing. They understood the rules to the game better than I did back then.

Hint: There are no rules.

Being widowed is so incredibly different from calling it quits for other reasons. I’m sure all marital losses are painful, but having your Love wrenched away without even the courtesy of an Exit Interview…you always said I was a pouter by nature, but it’s hard for me to imagine that I would ever dance again. I’m surprised and rather impressed my mother could.

But apparently she could.

And I’m terribly thankful for that.