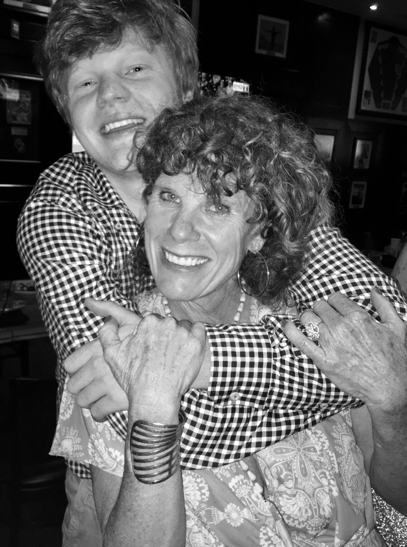 “No Child Left Behind!”

I’ve had to eat a lot of words as a mother.  In fact, it’s been quite a smorgasbord.

Not another bite for me, thanks. I’m stuffed.

I set myself up for this ironic predicament with a cache of lofty ideas in my youthful days about how children should be raised.  I was quite the expert on child-rearing before I became an actual Child-Rearer.

I did most of my “Field Research” in the early 80s observing my parents raise my brother.

I was married and out of the house at an early age, but ventured home as often as possible for vacations, birthdays and holidays. It was during these occasions that I witnessed appalling child-rearing atrocities that required immediate intervention.

My parents were recklessly and wantonly spoiling my younger brother.

It was anarchy at a level that simply did not exist a few years earlier when my sister and I still lived at home. It was as though my parents had just given up. Absconded. They were hardly recognizable as the same people, much less the same parents…

They weren’t enforcing curfew, he was playing his stereo at a volume that could eventually rupture his eardrums and rather than forcing him to the dinner table to dine with the family like a civilized human being, they simply allowed him to “order a pizza later when he’s hungry!”

And I can’t emphasize enough how much they fawned over him. They gushed all over him the minute he strolled in the door with all their,

So much undiluted attention you never saw in all your life. They lavished affection on him like he was the Second Coming.  Almost overnight, my brother had become an ONLY CHILD.

It was enough to gag any older sibling and I was quite certain it would ruin the boy.*

Naturally, I attempted in earnest to discuss this with my mother, who laughed it off and remained besotted with my brother until the day she died.

30 some-odd years later my husband and I were sitting in the kitchen having dinner, when our very own beloved Youngest-of-5-Only-Child walked into the room. We perked right up as though The Pope Himself had sauntered in.  We started firing questions at him immediately.

“How was your night last night?”
“Did you have fun?”
“Do you have any homework?”

It was our “No Child Left Behind” parenting policy at its finest.  We left no stone unturned. Every aspect of his existence piqued our curiousity.

He reached into the freezer and pulled out a frozen dinner, heated it up and slammed the microwave door off its hinges.

“Which dinner did you pick?” asked his dad. “I’m just curious because I picked them out for you myself from the Comfort Foods Section!”

“We thought our son deserves a little comfort!” I threw in for good measure (really upping the love-ante.)

“The Salisbury Steak,” our son grumbled in response, clearly unimpressed with how much time was invested in the selection of his frozen entrees.

“Why are you so burdened by our love for you?” I queried innocently.

(Okay… my query wasn’t all that innocent. I was kind’ve screwing with him. But it was amusing how victimized he seemed by our interest in the minutiae of his life.)

I assured him that when his 4 older siblings were still in-residence they would’ve killed for this level of concierge parenting.

More exasperation – another grunt – and one more eye roll.

“I’ve got two pairs of eyes on me at all times!” He complained wearily.

I guess he does have a point. At one time around here, it was two pair of eyes divided by 5 and now both sets are trained exclusively on him.

But he is the recipient of every ounce of our undiluted love and attention as well, so it should be an excellent trade off. Right?

In hindsight, I wish I’d kept my mouth shut years ago about all the things I knew nothing about.  Like being a parent. And all the varying stages of child-rearing.

But that’s okay.  I’ll gladly eat my own words these days – It’s merely comfort food of a different sort…

My brother “John David” on left with my hubs. (My mom loved him so much she gave him two names.)

*To my knowledge my brother still has his ear drums, abides by curfew and eats dinner every night with his family.  He does, I’m told, still order pizza on a whim.