“Bringing Sexy Back!” (How To Know If That’s A Loud Cliche You’re Hearing)

We’ve all heard of the dreaded “Mid-life Crisis.” Many of us have wondered if it’s coming our way. Some of us have even seen signs.

A few of us might’ve witnessed the phenomenon second-hand, when our own parents grappled with their versions in the 70s and 80s. That’s when a bottle of Grecian Formula showed up on Dad’s side of the vanity. Or maybe our mothers splurged on a pair of “Candies.”

When WE were teens, we considered everyone over the age 40 “ancient,” but our parents sure didn’t see it that way. They were too busy blaring their Commodores  8-track and sucking down Geritol.

Nowadays we find ourselves scanning the horizon for even a tell-tale whiff of a mid-life cliche – in ourselves or, even worse, in our spouse. As a result, every purchase we make is under high-level scrutiny.

But, how does one actually KNOW for sure if a purchase is “classic mid-life crisis,” or if it’s simply an item we genuinely needed or legit always wanted? What if there really is no hidden-agenda or deep rooted psychological meaning? How can one tell?

I believe the best thing we can ever give our spouse is the benefit of the doubt, so I refuse to overthink my hubby’s recent purchase of a motorcycle.

Sometimes Candies are just shoes…so it’s entirely possible that a motorcycle is just a vehicle. 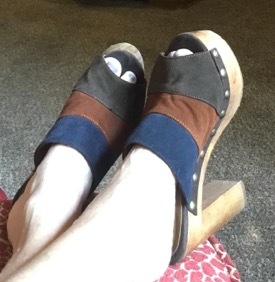 After all, when I met my husband, he was 18 and rode a motorcycle. It was a silver Kawasaki that my parents forbade me to ever ride on. I obeyed them for a quick minute before I clambered on the back. But in my defense, he did have two helmets and I didn’t want to come across high-maintenance, stuck-up or persnickety.

What halcyon days those were. We had tons of fun and made endless memories…all up until the day the day that bike was stolen.

Which might be the only time I’ve seen the man cry in 35 years.

By and by, we bought a car, recited our vows, installed some car seats and literally got down the road to raising a family. We never looked back. At least I thought we didn’t, until the other day, when he found the exact same bike and bought it.

I don’t know why I was so surprised when he called me outside to take a look.  He told me he was going to buy another one someday. I guess he and that bike had unfinished business.

When I sighed and rolled my eyes, he said, “What??? You used to love my bike!”

“I did…when we were teenagers!”

But now we are adults, mere weeks away from becoming actual grandparents.

“I’m bringing sexy back,” he quipped.

To further reassure me, he yelled over the insane loudness of the engine, “DON’T WORRY, I’M NOT GOING TO RIDE IT!”

Apparently, he’s just going to park it in the garage and rev the engine from time to time.  Which would be such a relief if I believed him.  (And I would believe him if I reserved clunking around in loud dangerous shoes for our house only.)

3 thoughts on ““Bringing Sexy Back!” (How To Know If That’s A Loud Cliche You’re Hearing)”