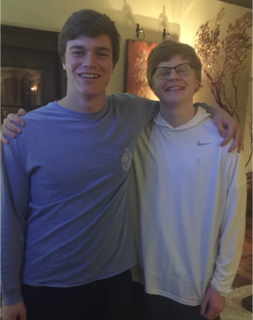 Almost every woman I know struggled as a girl with the age-old dilemma – how to talk to boys.  It was no picnic when we were teens ourselves and it hasn’t gotten any easier now that we are Boy Moms.   Conversations with teenage boys are stilted, awkward and typically lop-sided.   After all, your son is just a slightly less-mature version of his ol’ man,  amiright?

So how does a girl get that Special Guy to open up to her – specifically when that boy is her son?

The other day my 16 year old son came home from school.   I cheerfully asked him, per the usual, how his day was.   He answered dismissively, “Lit.”   Despite the groovy vernacular, something in his tone alerted my mom-gut his day wasn’t all that lit…

“It was great then?”

Just about the time I admonished myself to chill-the-heck-out, he responded…

The verbal floodgates opened. He proceeded to fill me in on all the injustices of the day.  I heard about the quiz the teacher surprised his class with, some weekend plans gone awry,  a girl he may or may not be crushing on and a plethora of other things.

Occasionally, behaving like an annoying sitcom mom pays off.   Oftentimes boys actually do want to talk, but they require an extra nudge.   In this case, re-framing the question a couple of times was just the thing.

-“Acting Bored is Better Than Waterboarding”

A friend of mine, mother to 3 boys and a girl, noted recently that she gets higher quality communication from her sons if she busies herself in the same room and talks to them while she’s engaged in another activity, (ie: back turned or without direct eye contact) for instance when she’s making dinner or loading the dishwasher and they’re in the kitchen getting a snack, doing homework or just passing through.

She has noticed her sons are far more effusive if she comes across mildly disconnected and not hyper-focused on them, whereas her daughter prefers her undiluted, undivided attention.  Teen boys get a little cagey and tend to clam-up if they feel like you’re overly invested in what they often perceive as an “information gathering” mission on your part.

I published an article recently about how we are “parenting our Millennials long after our bedtime.”  It was a light humor piece, whereby I complained that our teenagers bring their problems to us at all hours of the night.   I received quite a bit of flak in the comments section. More than a few readers wrote in to tell me my offspring were “Absolute Assholes” for bothering their parents in the wee hours.

It goes without saying that my kids can be brats –  they’re teenagers.  But, the bitter truth is that I was kidding-on-the-level in that article.  As parents, we are rarely “off the clock.”  In our household, we were never as successful “talk training” our boys as we were “sleep training” them.  I’m quite certain if we told our sons to stifle an issue until the morning light, we’d never hear about it again.

Unless we’re literally doing the hokey-pokey, we try to maintain an Open Door Policy.

If you’re feeling particularly enterprising,  you might even  try combining a few of these tricks. Next time your kid comes rolling in around curfew, you could jump out of bed and busy yourself matching up that pile of socks in the laundry room.  You just might find you’ve become quite the sounding board.

If not, at least you’ll get some socks paired and that’s totally lit.