“I Beg Your Pardon, I Never Promised You A (puff pastry) Rose Garden” Me & Lynn Anderson

I have a huge problem with January and I know I’m not the only one. I have zero motivation. It might be because most of us go 90-to-nothing starting around October and we are just exhausted about now.  By January, my usual alphabet soup of OCD and ADHD, which annoys my husband and intimidates my children, is replaced by post-holiday PTSD and SADD, which I think mostly just alarms them.

The other day I was lolling about scrolling through Facebook when I happened upon a short video one of my friends had posted. Naturally I was curious, because it appeared to be about one of my sole interests, Food;  I clicked on the watch arrow. It was a short instructive video on how to make “Apple Roses” out of puff pastry, apples and apricot preserves. They were gorgeous and looked moronically simple and wildly impressive. I evaluate all recipes in this manner – the PITA (pain-in-the-arse) Factor vs impressiveness. The ratios looked positive here, still it might be a bit challenging, considering I hadn’t done anything impressive since I took down our Christmas tree in late December.

I insisted that Jimmy (who could not have been less interested at the moment) take a look at the video. It was accompanied by some spunky banjo music so it captured his attention immediately. After we watched it, I meandered cautiously into the kitchen. I was feeling something that seemed to resemble motivation, but it had been so long since I’d felt inspired, I just couldn’t be sure.

Reasoning that it might not hurt to at least check to see if I had the necessary ingredients on hand, and was surprised to find that I was in possession of a few forlorn apples, one leftover sheet of frozen puff pastry and a jar of apricot preserves. When he heard me rustling around in the kitchen, Jimmy shouted out from the den all animated and hopeful,

“Are you gonna make those apple things?” I don’t know if he so much had a hankering for an apple pastry or if he was just excited and encouraged to finally see me doing something this month, as it was already the 26th or 27th…

“I don’t know!” I responded, as I pulled the puff pastry out of the freezer to either thaw or throw away.  I was not about to get strong-armed by his high pressure tactics.

Unsolicited Pearl of Marital Wisdom: One thing I’ve learned after 30 years of marriage is you always want to “under-promise and over-deliver.” Don’t get committed too early to anything you might end up regretting. You don’t want to find yourself in too deep. Especially with something as complicated as Puff Pastry Apple Roses.

‘I may as well slice the apples, they are about to go bad anyway,’ I thought to myself.  Just as I suspected, when Jimmy heard the unmistakable sound of knife making contact with cutting board, he couldn’t resist coming into the kitchen to micro-manage me.

“You’re cutting those apples way too thick,” he said, nudging me aside gently, as I am, after all, a middle-aged woman with a knife in my hand. I pretended to pout, as if I was actually upset that he was taking over.

“Preheat the oven to 375 degrees and locate the cinnamon,” he ordered, as though I were a common sous chef.  (Can do. Just as soon as I locate a bottle of Chardonnay*.)

45 mins later we were enjoying the buttery goodness of these beauties. They were absolutely effortless, on so many levels. 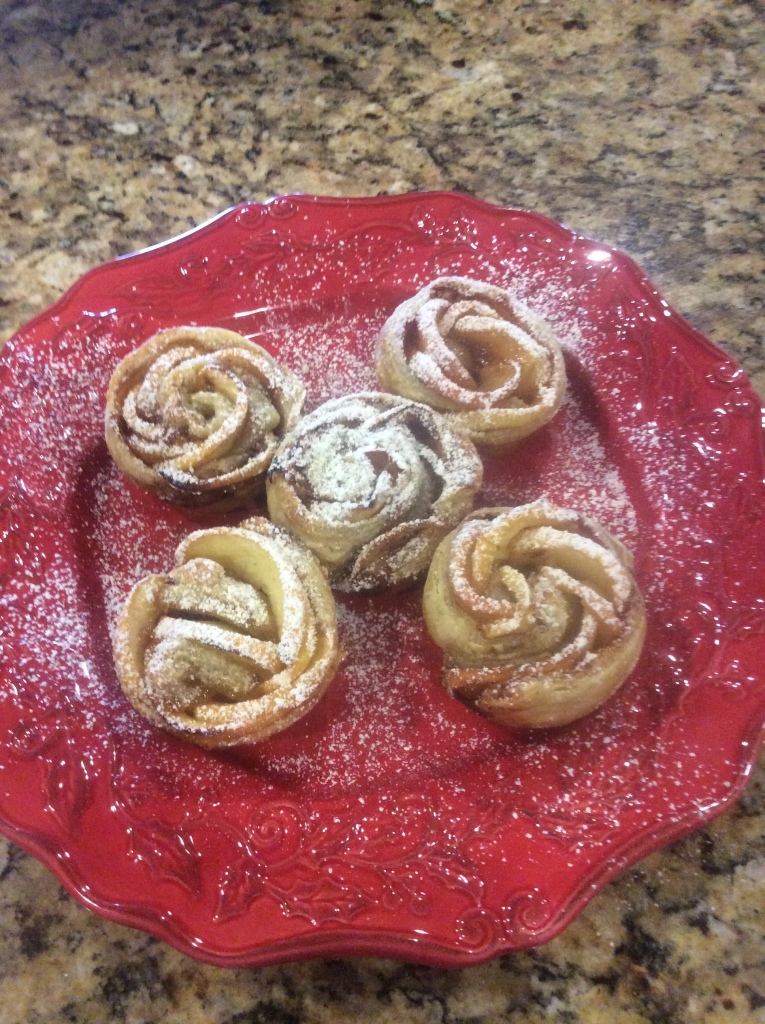 *This recipe does not call for Chardonnay, but it pairs nicely with the pastry!

One thought on ““I Beg Your Pardon, I Never Promised You A (puff pastry) Rose Garden” Me & Lynn Anderson”