Remember those compromising videos that you allowed people to take of you when you were younger?

Videos you would be mortified today, for your friends to watch…

You know the ones I’m talking about…

There’s a video of that nature floating around this house somewhere, that caused me to flinch in embarrassment every time I was forced to watch it.

It’s the video of my first few hours of motherhood. The cameras were rolling 24/7 the day Emilie was born. An hour or so after my firstborn was conceived, My parents couldn’t beat a path to Best Buy fast enough to purchase a large and cumbersome Panasonic Video Camera. They diligently toted this contraption around for many years documenting every moment of Emilie’s life, beginning with the day she was born. (Regrettably, these videos didn’t disappear in 10 seconds like today’s Snap Chat. Our generation had to wait years for VCRs to become obsolete and erase the evidence of our youthful folly.)

There are several unsettling things about this video, starting with the fact that I exhibit the composure and maturity of a 12 year old. The most cringe-worthy scene is when my Mom picks up one of those pacifiers that the hospital provides and coaxes it into Emilie’s tiny little rosebud mouth. The camera pans to me, as I screech and lunge off the hospital bed announcing with plucky self-import:

First-Time-Mom: “Don’t put that thing in her mouth! We certainly aren’t going to be starting anything like that!”

First-Time-Grandma: (tossing pacifier aside and dragging out her syllables) “Ooookie-Doookie!”

It’s painfully obvious that I had done my research and knew everything about the “shoulds” and the “shouldn’ts” of parenting my newborn. Apparently, I bought into some crap I’d read about “Self-Soothing.” (If self-soothing was really a thing, therapists and Ambien wouldn’t be thriving like they are today.) But, it’s good to know I had a rigid Maternal Compass that first day. 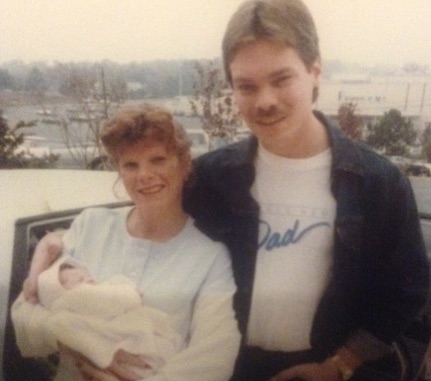 Fast-forward a few years later, and a few years after that, and a few years after that and a few years after that. Ironically, there’s no footage of me in FULL BLOOM as a mother, largely because no one cared to film it anymore. But, if there had been, it would’ve depicted me attempting in vain to coerce all 4 of my subsequent offspring to suck a pacifier. I tried every trick in the book from brushing the nipple gently around the baby’s lips to dipping the damn thing in Karo syrup, to dredging the Karo in granulated sugar (like I was rimming a martini glass, instead of a plastic nipple). All of my efforts were in vain, as not one of my belligerent and willful children ever took a pacifier despite my efforts. Karma had the last laugh. They say she is quite the Bitch.

I’m not exactly sure when I did an about-face, cashing in my high standards for peace, sanity and convenience, but it was definitely chameleon-esque. Someone managed to snap a picture of me sharing my Margarita with Baby Emilie at a Mexican Food restaurant a few months before her first birthday. (She was teething and I thought something icy and numbing on her gums would help, or possibly a little Baby-Buzz would knock the horns off?) 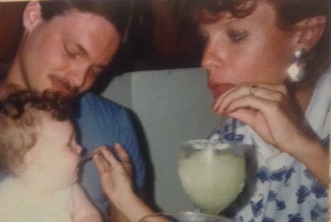 The important lesson here, of course, is that the woman who managed to raise YOU, undoubtedly knows more than anything you’ll ever read in a book. I’m glad we got this all sorted out before my kids have kids and I’m a Grandma. In fact, the more I think about it, the word “Karma” sounds remarkably a lot like the word “Grandma.”

Maybe I’ll have my grandchildren call me that….