During a brief lull in their plans last weekend, one of my friends’ high school daughters suggested that they go see “50 Shades of Grey.” My friend was naturally aghast and said, “You’re not going to see that FILTH and we’re certainly not going to go see it together!”

She later confessed to me that she really wanted to see it herself, but wouldn’t dream of going alone. So deeply troubled was I by the obvious decline in her morality, that I offered to go with her.

Fortunately, I was able to persuade a few more friends to sacrifice an afternoon in this selfless endeavor to research and provide commentary on such a sophomoric and debased sample of American culture. We reasoned that we couldn’t really criticize a movie we haven’t seen; besides, it would be good for the blog to provide the occasional movie review….

My singular request was that we attend INCOGNITO, as I was scandalized by the sheer thought of a Catholic Christian Mother-of 5 being seen in public at this movie, even if it was in the name of R&D.

We met on a weekday while the kids were in school. Per my usual timetable, I was the last to arrive.

The theatre was dark and my friends were barely recognizable in their clever disguises, still I was somewhat perturbed when they spotted me first and yelled out in unison, “Leslie Blanchard! We are sitting up here!”

(No matter, according to Gracie, who later commented, “Really Mom? you were ‘concealing your identity’ in a grey leopard blazer, hat and the sunglasses and gold hoops you wear every day? YOU screamed “Leslie Blanchard!” louder than they did….”) 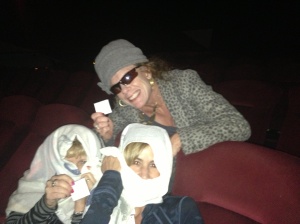 Leslie disguised as Leslie in shades and grey

For those of you unfamiliar with the story line, here is the premise: A beautiful young girl is dispatched to interview a wealthy young billionaire for her college newspaper. Her character is developed as an “innocent” in every way imaginable.

Through a series of poorly written and unlikely encounters, they both manage to fall for each other.

This is where it gets weird… In addition to being a Billionaire, who owns a corporation, a jet, a fleet of flashy cars and a penthouse in downtown Seattle, it is quickly revealed during their first date, that he has “some rather unconventional fringe tastes about how love can and should be expressed.”

I’m not talking about “Love Hurts” in the emotional sense like the beloved Nazareth ballad; I’m talking about some very serious physical ouches!

There were some scenes in that movie that were as hard to watch as some of the scenes we watched recently in “12 Years A Slave.” WORSE actually, as it implied that any sane “everyday-nice-girl” would ever willingly agree to be physically tortured in the name of love, without some other very compelling enticements.

This sparked quite a bit of controversial discussion among my women friends about this entire concept. Several ladies theorized that this girl acquiesced because the man was such a “hottie.”

He was so much more than a hottie, he was a billionaire. Bear in mind, the first week they were dating, he flew her from place to place in his private helicopter and gifted her with a brand “spanking” new BMW.

To illustrate my point, I propose an alternate movie scenario: Let’s say the male lead was a driver for UPS. We’ve all seen those guys… They are almost always great looking. When I see UPS drivers, I find myself wondering if that company has a handsomeness scale they use when they hire drivers.

The exact same actress meets the exact same actor, only in this version, he is wearing brown Bermuda shorts and is delivering a package to her. As she signs his clipboard, they strike up a conversation, are instantly attracted to one another and go on a date.

He picks her up later that evening in his Honda Civic (that he drives himself – strike the limo, strike the uniformed chauffeur). In the course of their first date, he too reveals that he has “some rather unconventional fringe tastes regarding how love can and should be expressed.”

All I’m suggesting, is that when you replace the Jaguar with a Honda and subtract out the penthouse, the plot line gets considerably less intriguing.

There’s no need to thank me for providing this community service for my blog following. I’m glad I could save you all the price of a ticket and the calories in the Milk Duds…

And the next time you pull up at a red light beside a UPS truck and ask yourself “What can Brown do for you?” Just motor on your way, Sister Christian!