“And The Beat Goes On” (Inevitably, When the Next Generation Comes Along, We End Up Right Back Where We Came From…) 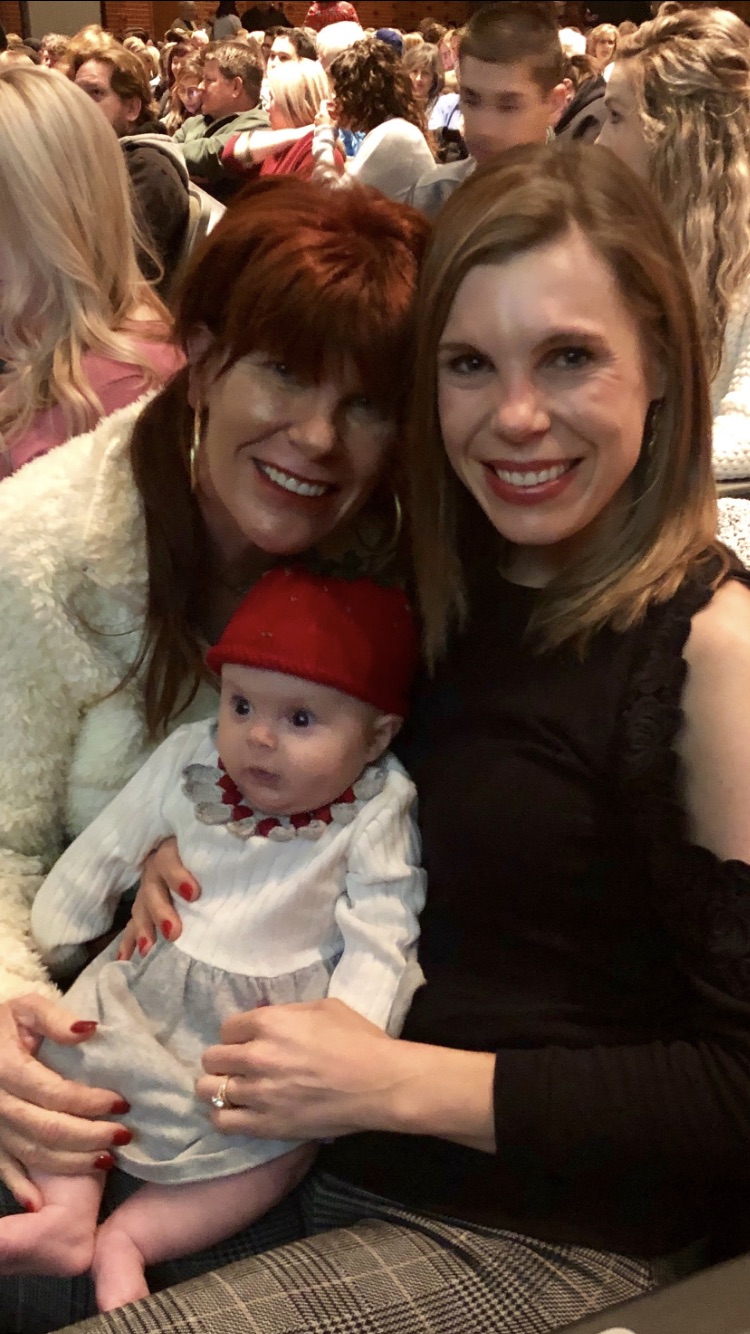 Anna, 4 mos, qualified as a “non-vertical” and was merely recognized in a slide show during intermission.  We look forward to the days she will steal the spotlight….

It all began when I awoke to the savage sounds of an alarm clock blaring this morning.

It was faintly familiar, yet a distantly forgotten annoyance from my past life.

It’s been a few years since I’ve had to start my day in such a harsh way.  In hindsight, I almost wish there had been a hidden camera in my bedroom filming my reaction, as I fumbled around trying to understand why anything would actually be trying to wake me up.

I’m an incurable insomniac, so the last thing I ever do is pre-set a mechanism to purposely awaken myself – should the sweet relief of slumber chance to find me.

But, today my grandson*** had his first live onstage performance.   He was the lead in his Dayschool’s Christmas rendition of “Twinkle Twinkle Christmas Star.”   (At least he appeared as the lead in the Indy version I filmed, edited and produced.  All the other toddlers trifled about onstage as mere “extras.”)

Sadly, the program began at the ungodly hour of 9 on a weekend morning.  When I found out the time, I lamented quietly to myself,

Who is up and about at that hour?” And then I remembered from my own experience…children….and their parents.

I’m really not the Diva I’m making myself out to be.   Quite the contrary. I served my time.  I raised 5 kids.  I did my bit for The Pope and all of Humanity.  I’m not sure I could actually count how many Christmas programs, band recitals, dance recitals, swim meets and ball tournaments (every type of ball ever made)  I’ve logged at or before sunrise on a weekend morning.

And I’m not really even that bitter…

After all, I have had 4 years now to rest.  To sleep in.  To rediscover  lazy.  To find myself almost borderline disinclined.

But, once I was up, dressed and downed a cup of coffee, I was in that auditorium with bells on. jingle bells in fact.

I actually arrived before anyone else and saved seats for the whole family on the 3rd row.   (I’ve been known for years by everyone as “Our Lady of Perpetual Tardiness,” So I’ve delighted in surprising relatives at how prompt I am these days, now that I’m responsible for dressing only myself!)

This wasn’t the school’s first rodeo, nor their first Christmas Program.   They knew from experience to begin the event with the students I’ll refer to as “Vertical Diaper-Clad.”  They called them the “1 year old and 2 year old classrooms.”   The Non-Verticals (aka: horizontal infants) did not perform, but were “recognized” in a slide show during intermission.

My grandson and his class were the fourth or fifth act to perform.  Apparently, there was some little  ham of a girl center-stage who stole the show with some version of “the worm,”  but I never got to see her shannanigans, as I was assigned the job of videoing my own progeny, thus my eye and my iPhone were trained solely on him.

He started out with a little stage fright, but then you could see the light of recognition cross his face as he thought, “Oh yes, I recall rehearsing this number!” and began a series of plyometric movements that one can only hope will assist him down the road in dunking a basketball at an earlier age than most.

Right before our tot came on stage, my son-in-law nonchalantly announced his intention to depart as soon as his son’s number concluded.   Not unlike this morning’s alarm clock, this was also faintly reminiscent of something or someone from my past.

And so was my daughter’s reaction.

“You can’t do that!   It’s rude to all the other families and their children who watched YOUR child perform!”

Right about that time, over the PA system, the school announced that there would be a “slight intermission” to allow time for the the parents of the Diaper Clad Verticals who had just performed to collect their children backstage.

That’s when I intervened, earnestly explaining to my daughter that the school creates this intermission purposely, so “the families of younger children can leave the auditorium with discretion.”

“They don’t expect us to stay for the next 2 hours until the 10 year olds sing.  It’s just too hard on the wee ones!  We will have years and years to endure all of this,”  I gently persuaded, (unselfishly on behalf of my busy son-in-law.)

As we were leaving, I pinched my son-in-law as hard as I could on the back of his arm and hissed,

“For what?” he protested. “I was leaving after he sang no matter what!” all puffed up and full of his foolish manhood.

If my mom had been there, (The Gold Standard by which all other grandmotherly enthusiasm  should  be measured by) I guarantee she would’ve mustered up a tear and said, “Oh we simply have to stay and listen to all the other classes sing.  The sound of children caroling is so joyful!   It’s what Christmas is all about!”

3 hours later, we would’ve been fighting our way out of that parking lot bumper-to-bumper, with low blood sugar hating Christmas hating children and hating carols.

Not necessarily in that specific order.

No – What Christmas is all about is Peace, Love and Pragmatism.

Christmas is also about the jaw-droppingly amazing gift I expect my son-in-law to give me next week as it occurs to him that I’m the coolest, most supportive mother-in-law a dude could ever have, albeit camouflaged as a somewhat Accidental Grandmother.

***I know it’s hard to believe I’m a grandmother but that’s what happens when YOU have a child and then THEY have a child.   There’s nothing you can do about it.  And it doesn’t matter what chic little moniker you come up with to call yourself –  You’re still a grandparent.

4 thoughts on ““And The Beat Goes On” (Inevitably, When the Next Generation Comes Along, We End Up Right Back Where We Came From…)”